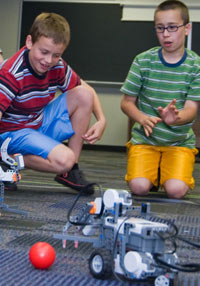 This "visual language" was invented by Carnegie Mellon, and licensed by Lego® Mindstorms, the arm of Lego® that designs robotics. By replacing numbers with pictures, it provides students of any age an opportunity to learn basic programming and engineering skills.

Other robots created during the camp included a scorpion which would whip its tail at any person in the vicinity using an ultrasonic sensor that is akin to radar because it detects distance and direction. Also, the students commanded the scorpion to move forward and backward using their voices.

"Their thought processes are neat to watch," notes Rich Schell, industry training coordinator at LCCC, who brought this idea from Penn State. "The kids don't even realize that they're learning because it's fun," adds Schell.

The students appeared to have a good time designing, building, and taking apart their Legos, all the while using their communication skills.

"This is nothing different than what is in industry," Schell says.

During camp, pointers were given about how to create more efficient robots by keeping weight over the tires, and moving the sound sensor as far away from the motor as possible. Also, the students were taught about gear ratios.

"This isn't just a game with toys, these are complicated robotics," notes Elick.

Lego Mindstorms holds local, state, national, and international competitions, where they build a "moonscape," a maze with obstacles created by Lego to be traversed by student created robots.