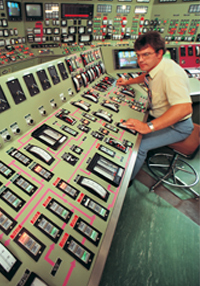 Ridall plans to continue his education to at least the baccalaureate level, and is interested in working in the nuclear industry as either a Health Physics Technician, Health Physicist, or even an Instruments and Controls Technician.

Qualified students enrolled in this program may be considered for a work-cooperative practicum arranged with PPL Susquehanna. Graduates of the NET program who have successfully met all of the degree requirements will be well-positioned for available jobs in the nuclear industry.

- Measure the levels and types of radiation produced by nuclear experiments, power generation, and other activities

- Collect and test samples of air, water, and other substances for levels of radioactive contamination

- Use computers, gauges, and other instruments to monitor the performance of nuclear power plants under the supervision of nuclear reactor operators and engineers

- Base calculations on factors such as temperature, pressure, and radiation intensity to determine whether equipment is functioning properly

- Make adjustments to improve the performance of reactors and other equipment, such as opening and closing valves and electrical breakers.

Micky Marlott, another student graduating from the nuclear engineering program at LCCC, went to school on and off for a long time never knowing what kind of a career he wanted. He explains that he didn't originally intend on going into the field of nuclear engineering.

"It actually happened mostly by accident," Marlott says. "I was a certified pharmacy technician by trade for five years. Then I was laid off from my job. I heard LCCC was offering 12 free credits for anyone who was collecting unemployment at the time." He was told there is a large turnover rate from people retiring at nearby power plants and there will be jobs available. So he decided on enrolling at LCCC.

"What seemed like such an awful event losing my job turned out to be a great opportunity!" Marlott says. He is looking into continuing his education to obtain a bachelor's degree in Nuclear Engineering at Penn State University.