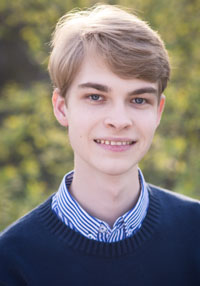 High School & College degree together
William Davies isn't a traditional LCCC student. While most college students are fresh out of high school, Davies is committed to finishing his senior year of homeschooling.

While the idea of finishing two years of college can be stressful enough, one must wonder why anyone would want to do it while still in high school. Davies says being homeschooled gave him "freedom to customize his education." However, he wanted a challenge. Since a young age, he had been interested in computer science and had used a children's programming language called, "Scratch." Davies decided he wanted to learn "more advanced programming," therefore, he enrolled at Luzerne in Fall of 2014 starting with an HTML night class taught by Professor Earl Weidner.

"He (Professor Weidner) was supportive and encouraging and made me feel that I could be successful at LCCC," Davies noted.

Finishing a college degree while still completing his senior year in high school was going to be a difficult task. In order for a student to be eligible for the early college program, a wide variety of criteria must be met. For example, a potential student must have completed SAT's or college placement tests and have maintained a minimum GPA of 2.0 in high school. The student must also keep up with their assignments during college and may never drop below a "C" grade in any course.

In addition to focusing on achieving a degree at Luzerne, Davies found that some of his college classes counted towards receiving his high school diploma as well thanks to the dual enrollment program. The ability to conquer both a diploma and a degree became a more structured idea with the aid of many professors he came in contact with.

"The heads of the Math and Computer Science departments were a big help in guiding me toward completing my degree requirements," Davies says. "I would strongly encourage other high-schoolers to take classes at LCCC. I am very impressed with the level and quality of education my professors provided."

William Davies will complete his Associates in Computer Science degree this summer. While he hasn't picked a four year college to continue into, he intends to become a mechanical or environmental engineer.

Davies looks back at his time at Luzerne County Community College and says, "My time at LCCC has very much helped me; it acted as a great springboard to four-year colleges, and helped me to earn merit scholarships toward an engineering degree. But it was not just a stepping stone. The skills I have learned will stick with me, and help me for the rest of my life."