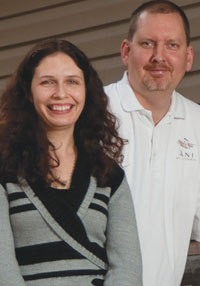 An Artistic Career
There's something to be said about following your dreams. Former LCCC professor, alumnus, head instructor of The Ani Art Academy Waichulis and co-founder of the international Ani Art Academies project, Anthony Waichulis '94, can vouch for that. "I'm a geeky kid from Northeastern Pennsylvania. When I told people I was going to go to school for art, they looked at me like I was going to build a nuclear missile in my backyard," joked sarcastic and quick witted Waichulis of his aspirations. "But, I've become very successful. I remember one of my students asked me early on, 'What if you're never successful?' But I get to wake up every morning and do what I love. That's the real dream come true."

Anthony Waichulis rooted himself into the world of art at a young age. His grandmother unknowingly nurtured his talent with the intent of doing damage control at her home.

My grandmother didn't want me and my siblings messing up her house," Waichulis explained of his earliest memories of drafting. She provided her grandchildren with a stack of paper, pens and pencils to keep them occupied. They would draw for hours each time they visited.

Growing up just two miles from Luzerne County Community College, he decided to attend LCCC and pursue is love of art. "It took me a while to truly realize that an art career was a viable option," he says. "My parents supported anything that made us happy and taught us that anything was possible."

While studying at Commercial Art at LCCC, Waichulis grew more confident in his abilities. His received positive feedback from his instructors and other students. "At LCCC, I learned the impact of diversity from all the choices in the art world, there are so many different approaches to communicating your message visually." He remarks at the faculty who influenced him at the College. "They are fantastic artists that not only were great teachers, but highly successful in the private sector."

After studying at Luzerne County Community College and Schuler School of Fine Arts, in Maryland, Anthony Waichulis went on to excel remarkably as an artist and art instructor dedicatedly pursuing the theory of realistic representation in art more commonly referred to in the art world as Representationalism. The ability to produce breathtaking paintings remarkably comparable to photographs mixed with a desire to educate led Waichulis to open his own art studio in 1998 that he called The Waichulis Studio.

"I would say it usually takes anywhere from one to three months," Waichulis says of time put into a single painting, "but speed comes with mastery of anything."

Waichulis finds the reason he struggled less with his technique and execution to be because he created for himself his own method of practice.

"I found it common to see that the whole science of art would change from teacher to teacher. It was at times extremely frustrating," explained Waichulis of the development of his own system, "So I started trying to look for common threads that connected the different elements of art education and morph them into ways of my own understanding."

In 1998, he started teaching as an adjunct instructor at LCCC. "I taught a variety of drawing and painting classes at the College," Waichulis recalls. "I miss the waves of new students who would come through the doors each semester."

While teaching, he met then commercial art student, Leah Trocki. A year after Leah graduated from LCCC in Painting/Illustration in 2000, Tony and Leah started dating, later married, and opened their studio in Bear Creek. An accomplished artist, she was a finalist in the Art Kudos International Competition, featured in two North Light Books, and her artwork has been included in national and international publications. She also studied with Anthony to develop her personal artistic style.

Little did Anthony Waichulis know that his own personal method of art education would light his career on fire.

In 2010, one man in particular became highly interested in the teachings of Anthony Waichulis. Tim Reynolds, the co-founder of a thriving Wall Street trading firm with passion for the arts, studied art under a colleague and friend of Anthony Waichulis named Timothy Jahn. In times of artistic difficulty, Jahn turned to Waichulis for creative insight.

After Waichulis passed along his personal process, Reynolds began to see a vast improvement in a short amount of time in Jahn?s art work. Jahn then passed along the teachings of Anthony Waichulis to Reynolds. In a relatively short amount of time, Reynolds too, began to see drastic improvement in his own art work. Stunned and curious, Reynolds demanded to meet the man behind the easel. The two arranged to meet for dinner in New York City.

"Initially what was explained to me was that Tim wanted me to create some instructional DVDs for his use. He then went on to explain that his larger goal was to build international art schools that would use my curriculum to provide an arts education to those that may never have such an opportunity. I was shocked," Waichulis revealed of their sit down.

"And almost immediately he (Mr. Reynolds) began talking about how there may be intellectual property issues," Waichulis continued, "because it's my system and he was probably waiting for me to say that I would want this much money and yadda yadda ya and I think I really shocked him when I said, 'You can have it, you can have my program for free.' We hit it off right there."

That was the conversation that gave birth to The Ani-Waichulis Art Academies.

Located in the serene and beautiful mountain regions of Northeastern Pennsylvania, on the sloping hills of Anguilla's few Caribbean farmlands, and on a private peninsula that sits surrounded by the crystal blue waters of The Dominican Republic, the first three of the soon-to-be worldwide Ani-Waichulis Art Academies provides students with strict and concise training in the basics of a rich visual language. In addition to the three studios above, locations in Sri Lanka and Thailand have recently opened this year.

"I visit each academy prior to launch," explained Waichulis of his physical involvement in the international locations of The Ani Art Academies. "I hate traveling. I'm not a small man. There?s a lot of logistics issues," he joked. "For me, getting onto a plane is comical in itself. I smell my knees a lot."

Waichulis explained the process of what he called a preliminary promotions campaign on behalf of the academies. After taking the time to visit high schools and reach out to those considering some time of post-secondary education plans, an open house is held for each location.

"I would say the vast majority of everyone that's gone through the program has had overwhelming success right out of the gate," Waichulis shared. "Most of our artists are approached by respected galleries quite early, much like being scouted by the NBA or Major League Baseball while you're still in your college years. We get a lot of professionals that look to us for where tomorrow's talent is coming from."

Waichulis explained that a classmate he studied with at Schuler Academy had conducted a study for her final graduation project. She looked into the success rates coming out of art school and found the results to be shocking.

"It was a 92% failure rate and 8% success rate moving forward into a professional academy," shared Waichulis. "Here, we blow the doors off that average."

For serious artists a seat in the Ani-Waichulis Academy art studios is a coveted thing, but what exactly does it take to land one?

"We get a lot of applications," said Waichulis. "We look to demonstrations of ability, but that is not our primary concern. We have applicants write a short essay to share with us how art has played a part in their life up until the time of their application and most importantly, how they feel that we will be able to contribute to them being able to attain their goals." Waichulis went on to explain and rightfully so, "This is a fantastic resource for people, however the resource is limited. We don't want to designate or award resources to someone that may lose interest in six months."

When asked about his approach to teaching, Waichulis joked, "Oh it's brutal. It's a lot of screaming, yelling, throwing things and tantrums. I've beaten someone with a shoe once. But seriously, it's a very strict program. The evolution of art education for the longest time appeared somewhat stagnant. It long held on to the dynamic that your knowledge was your livelihood and if you shared too many 'secrets' as a professional artist, you were handing your employment away. Often what was shared and passed on from an educational standpoint was very slim. Over the years knowledge would be rediscovered by one person and unfortunately, it would vanish again in a generation or two because not many people were teaching everything that they knew."

Sharing the artistic wealth however, had never been an issue for Anthony Waichulis. Sharing is actually what helped him to achieve overwhelming and inarguable success. For being such a successful man, Waichulis stays humble by not only keeping to himself, but by setting an example, sharing his story, and remembering where he came from by staying involved with LCCC, recently making an appearance as principal speaker at graduation.

Anthony Waichulis may be someone who likes to stay out of the limelight, but there is no way his art work ever could. Published in many prestigious art magazines and even contacted by George Lucas's Lucasfilm for a contribution to the Star Wars publication franchise, Waichulis has undeniably climbed to the top despite the eyebrows cocked in his direction.

"Adversity is good, competition is good, challenges are good. It all makes you into the person you need to be in order to do what you want to do. Adversity gives you an advantage over the people who seem to deal with minimal challenges and coast right through," shared Waichulis, "because the first time they encounter a bump in the road they're more apt to throw in the towel and walk away, but someone who had to work through adversity develops an appreciation that someone who didn't couldn't understand and it?s that appreciation that catapults you over any bumps in the road."